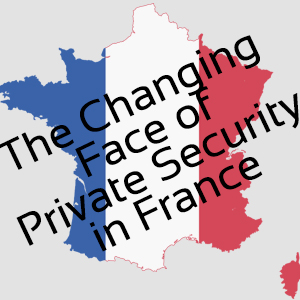 Over the last decade or two private security has been taking major steps forward in France (as it has in many other European countries). Since the law of 14th March 2011 (LOPPSI: Law of Orientation and Programming for the Performance of Interior Security), introducing sweeping changes through France’s codes (defence, transport, territorial, social services, highway…) private security has been placed into a new code enacted just two years ago. The Interior Security Code regroups all the legislation of not only France’s private security, but also that of her national and municipal police, her Gendarme and her fire & safety services. By including private security in the same code as her police force France clearly underlines her intentions to liberate police services from at least some of the burdens that distract them from their core function.

As with the majority of Europe, France has already delegated the responsibilities of cash in transit and airport security to the private sector. Public fire & safety services are now present in only a handful of the country’s public buildings having been replaced by specialized private officers known as SSIAP – ‘Service de Sécurité Incendie et assistance à Personnes’ (which can be broadly translated to ‘service of fire & safety’). With ever tightening budgets and ever decreasing effectives, public services are examining what other responsibilities can be handed on. A close eye is being kept on her old cross channel rival and although France has at times chuckled smugly at what she has perceived to be a typically eccentric approach by the UK to issues such as CCTV, or privately managed prisons, she is clearly fascinated by what she can learn from Britain’s “trails and errors”. The USA’s policy of the privatization of almost everything is less and less scoffed at. The coffers are empty and all of Europe is struggling to reverse the trends to fill them again. France is starting to believe that perhaps private security could provide part of the answer.

The law defining private security’s role (law of 12th July 1983 now codified into book VI of the Interior Security Code) is currently undergoing a major facelift. The surgery has been ongoing for quite some time now and the finalization of the “new look” law has suffered numerous delays. The most recent of these is the recent departure of the minister of the interior. Manuel Valls has just been moved up to prime minister and his replacement, Bernard Cazeneuve, will need time to adjust. There has also been the departure of the minister designated to private security, Jean-Louis Blanchou. Consequently France’s private security is preparing itself for a long, dry summer with no immediate sign of an updated law to quench its thirst for new openings in the security market place.

Not all are disappointed by the changes at the top. Some are hoping that the new arrivals will be able to inject new momentum into old questions that have not yet received satisfactory answers. Amongst these are considerations towards dog handlers (an activity that has just seen the arrival of a new professional federation), the rupture between security officers and fire & safety officers and France’s attitude toward militarized private security companies. France has only just woken up to the possible opportunities of the latter. The 100 billion dollar market has been almost exclusively sown up by UK and USA leadership. France is currently running after lost time and her share of that market. She is currently pushing through new private legislation to regulate her entry into the theatre of international operations with a focus on maritime private security.

The separation between fire & safety and security has caused many a headache for asset protection managers trying to put in place adequate coverage for their stores/factories/offices in France. Even the French themselves have difficulty juggling with the rules. In certain circumstances security officers and fire & safety officers, like oil and water, do not mix. The French Construction & Habitation Code dictates that for specific categories of buildings dedicated fire & safety officers must be deployed. Any needs for CCTV, or access control should be covered by a separate team of security officers. A major rift between the two activities occurred in February 2009 when new licensing laws were introduced. The rift stemmed from a widespread misinterpretation of the very first article of the private security law. Fire & safety officers rejected the requirements for licensing claiming that their activity was not governed by the same legislation as security officers. Because their specialized training is imposed by the Construction & Habitation Code, they insist they are not included in the private security law. This is all well and good, but the same logic would then be applied to airport security officers as their specialized training is imposed by the Civil Aviation Code. As it happens airport security is included in the private security law and many maintain that the fire & safety officers clearly are as well.

The first line of the disputed article of law states: “Is included in this act any service offering: physical or electronic security for the safety of buildings and the occupants of those buildings” (article L611-1, interior security code). Considering: that security officers (and more especially fire & safety officers) are generally physically present on the premises to be protected; that a fire detection system is of course electronic; that both are in place for “the safety of buildings and the occupants of those buildings”, it would seem perfectly clear that the SSIAP officers are included in the private security law. Despite what would appear to be evident to all, no-one inside France’s administration has been able to offer a satisfactory solution to the discord. Perhaps the changes at the top will provide the missing catalyst in the search for a mutually acceptable compromise. Whatever the outcome it would seem unlikely that France will create any further ministerial bodies to govern the sector. The CNAPS (Conseil National pour les Activités Privées de Sécurité – National Council for the Private Activities of Security) has been in place for over two years and the added expense of a new body to cover the needs of just 15% of the sector’s overall work force would undoubtedly be perceived as excessive (especially in these times of budgetary restraint).

Bickering over licensing laws aside, what is of the most interest to private security in the expected reforms of the long awaited new law is to know what activities will be released from the public to the private sector. As mentioned above private security has become a recognized partner in the “co-production” of national security. This recognition can be traced back to Jan’ 1995 and the law know as the LOPS (Law for the Orientation and Programming of Security). The previously mentioned law of March 2011 confirmed this partnership. What is expected now is a closely controlled movement out of the confines of private areas and onto the public highway. Speculation is rampant as to what areas private security could move into: passport control in airports, CCTV coverage of city streets, parking offences…

The potential for a new, explosive rise of the French private security industry is at its heights. The delay in discovering what shape that potential will take depends largely upon the new minister of the interior. The new private security law is expected for the end of the year, but as the French would say “Fin de l’année… mais de quelle année…?!”

James Lawson is a Security and Safety Manger with many years experience operating in France. To contact James you can get in touch through his LinkedIn profile, below.