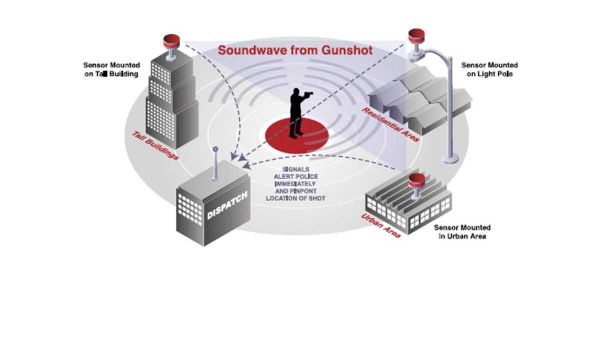 On the 15 December 2009 West Midlands Police (WMP) initiated project Birmingham Safe And Sound in Birmingham city. In February this year a report was made public showing the details of this project and how it was helping to bring down gun crime in Birmingham, but recently the Birmingham Community Safety Partnership – which funded the system – decided to pull the plug because of issues over accuracy and cost.

To better understand the system, first lets look at some statistics involving gun crime in the Birmingham area.

As you can see you can see there have been a fair few incidents in the Birmingham are involving gun crime, and 60-70 incidents a year where a firearm was discharged. This is where Shotspotter comes into play. Shotspotter is a system that detects gunshot noises and triangulates their position to within a 25 metre radius.  This is useful for a city with a gun crime problem as it can alert the police the moment a gunshot is fired, giving them a location accurate to within 25m. It is a system that has been heavily used in 51 cities across America and has resulted in a drop in gun crime of almost 35%.

ShotSpotter uses either wired or wireless sensors deployed over large areas utilizing the principle of acoustic triangulation to locate gunfire. The computer system then uses basic triangulation calculations to give an accurate location of where the shot was fired from. The ShotSpotter website describes it as being “able to deliver instantaneous system reports to dispatchers within seconds of a weapon being fired“.

During the initial installation and calibration phase for the Birmingham area the statistics looked promising. The February report noted the following points;

On the face of it it seems like quite an accurate system. So why has it been scrapped? Well the cost was one of the reasons given. It’s estimated to cost around £40,000 per year to run, which is probably equivalent to a single front line officer in terms of salary, equipment and training, maybe even less. Another reason given was the fact that its accuracy rate has dropped recently. It was found to have failed in detecting 4 confirmed shootings in the past 12 months bringing the accuracy down to below 80%.

Councillor Waseem Zaffar (Lab, Lozells and East Handsworth) said: “I was originally very supportive of this and I was keen to try and use technology to tackle this problem.

“But in January and again last month I voiced my concerns about the accuracy. It was clearly not working as well as in America.

“There is no point having a system that is nowhere near good enough. We were promised 85 per cent accuracy and we got nowhere near that.

“I think it was a wise decision to cut our losses and move on by using the resources to tackle the problem in other ways.”

With those statistics in mind and given the relative low cost, it seems to me to maybe be a bit a bit early to be scrapping the scheme. Especially as the very nature of this technology means that things can only really improve, as has been the case in the US. One things for sure, it will be interesting to see the gun crime figures in the years to follow.