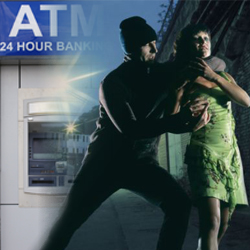 I’ve recently spotted on Facebook and various other social media platforms an email that is doing the rounds giving advice on what to do if your mugged or robbed while at the cash machine/ATM. The contents of the email are completely untrue as I will explain, but more worrying is that the advice could cause someone to become unnecessarily hurt. Here’s why:

The email that has been passed around states that information from Crime Stoppers suggests that if you are robbed at the ATM you should input your bank card PIN number in backwards to alert the police that you are being forced to withdraw cash. The information is wrong, and as soon as I read it alarm bells started to ring. Here is the content of the email being passed around social media circles at the moment.

If you should ever be forced by a robber to withdraw money from an ATM machine, you can notify the police by entering your PIN # in reverse.

For example, if your pin number is 1234, then you would put in 4321. The ATM system recognizes that your PIN number is backwards from the ATM card you placed in the machine. The machine will still give you the money you requested, but unknown to the robber, the police will be immediately dispatched to the location. All ATM’s carry this emergency sequencer by law.

This information was recently broadcast on by Crime Stoppers however it is seldom used because people just don’t know about it.

Please pass this along to everyone.

This is the kind of information people don’t mind receiving, so pass it on to your family and friends.

As you can see from above, it seems like a good idea and in practice it may prove to be useful but the fact of that matter is that this system is not in place in the UK, and this has been confirmed by the fraud departments of 4 major UK high street banks. In fact 2 of the banks had said they’d never even heard of it before while one laughed and said they’d been made aware of it and the fourth simply stated “it isn’t a technology that we use and as far as I’m aware no-one in the UK uses it.”. Furthermore according to the North Wales Police website this information should be ignored and not passed along. They state “If you receive this email or one similar to it please ignore it. The advice contained in the email is false, so there is no reason to forward the email onto anyone else.”

So where has this information originated from? Well it is a real technology/idea developed in the late 80’s to early 90’s but was never patented and so far it doesn’t appear to have ever been used.

Here’s the thing, most of the time a mugger just wants your money. They’re not interested in causing themselves further grief by killing or hurting you. They just want your money as quick as they can so that they can get away quickly. We already know that in the UK, at least, the reverse pin technology doesn’t work. So if you’re being robbed at a cash point/ATM and you try this, the machine is going to say incorrect PIN. But first, if you haven’t already memorised your reverse PIN, you’ll need to figure it out. Yes this only takes a few seconds extra but with a knife to your neck chances are you may struggle for a few seconds, because in a high stress situation most people struggle to operate and think like they normally do. Now let’s imagine your attacker has never heard of this reverse PIN technology. At best it’s going to look like you are trying to stall them, which is at least going to agitate them. This is a bad thing. Agitated criminals become unpredictable and tend to escalate things to get the job done. Now you run the risk of your attacker turning his threat of violence into a reality to prove that he is willing. You risk forcing your attacker to prove to you that he is willing to hurt you. Now let’s imagine that the thief has heard of the reverse PIN technology. He sees you taking your time inputting your PIN and then sees the ATM say wrong PIN and figures out what you are trying to do. He may just run off out of fear of the police turning up. He may get violent to teach you a lesson, either way, are you willing to chance it for the sake of some money?Another thing to consider is that this will give false hope. Imagine being terrified into giving someone your money and attempting to do this hoping that the police will be along any second to rescue you only to find it doesn’t work. Is your life worth the risk?

The best thing to do if confronted in this situation is to comply as best as you can. As a protection professional I am often asked what the best form of defence is and people are always surprised when I say “don’t be there in the first place”. It’s true, and I bet most reading this are thinking “well duh, obviously” but it’s surprising how many people fail to put it into practice. My line of work as a security professional is all about mitigating risk. Making sure I am always in the best position possible to reduce or avoid risk that may affect or harm my client or whatever it is that I am protecting. The same applies to your life. Before going to do something take a quick look around and think “how much risk am I creating by doing that”. For example don’t use the ATM in a dark alleyway at 3am with a hooded man standing nearby because it’s 5 minutes quicker than using the one on the brightly lit high street (yes an unlikely scenario but it proves a point). If you see something out of place, or something that makes you raise an eyebrow then stay away. But to see these things you must look and see and not just look. Pay attention to your surroundings. How many times have you looked at your watch to see what the time is and then had to look a second time because you didn’t actually see what the time was. That is looking without seeing and people do it all the time.

If you think you can get away, then run, but only if you are sure. If they want your wallet or purse, throw it at their feet so that you can keep your distance. Don’t try and fight them off, yes you may win, but more often than not you will lose or be hurt. Another question that pops up to me every now and then is “how can I disarm someone robbing me with a knife or a gun”.  My response is always “don’t”, and like before this surprises people. They think because of my job that I would automatically advise going Bruce Lee, but here’s the problem with that. I have had extensive training to be able to perform a pistol disarm or a knife disarm and to be able to restrain a potential attacker, it is something that I practice regularly but guess what, I wouldn’t instantly jump into Jason Bourne mode if I was being mugged. The reason being that in real life, you can get seriously hurt or injured while trying to perform a disarm. The movies are totally unrealistic and so are all of those martial arts displays you see where guys are throwing people around left right and centre. In real life you will be hurt. A good example is when I completed my Close Protection training. We touched on the subject of knife fighting and I’ll never forget the first thing our instructor said. “if you are disarming a knife attacker or even fighting knife to knife you must understand that you WILL be cut”. For the training we used plastic knives with foam edges soaked in red die. But the end of the training everyone had red slash marks all over their body! Real life hurts, plain and simple. Generally speaking the safest thing to do, if you unfortunately find yourself in this situation, is just comply.

Obviously there are going to be times when you, as a victim, will have no choice but to fight back and defend yourself. But that is a another topic altogether and is not something that can be easily, if at all, instructed or advised via written format. If you feel that the best thing for you is to take some self defence classes then take a look around in your local area, there are plenty of instructors all over the UK, but remember this. It takes years of constant practice and training to be able to carry out effective self defence techniques. A few lessons a month will NOT instantly make you indestructible! As I said earlier I mitigate risk within my job and also within myself, we all do to some extent (taking an umbrella when there is a chance of rain is mitigating the risk of getting drenched in a downpour!), and within that I asses the risk to myself. Is it worth me trying to disarm someone or fight them off and potentially ending up seriously injured or even killed if it goes wrong for the sake of a few hundred pound… no it’s not.